Immunology 101 Series: Understanding the Immune System & How Vaccines Protect Us

Do you get overwhelmed trying to make sense of biology? It’s okay. We do, too, which is why we’ve asked Dr. Aimee Pugh-Bernard, an immunologist and educator, to give us an easy-to-understand review of the basic biology we need to make sense of the science behind vaccines. In this first installment of the Immunology 101 Series, Aimee will explain how the body’s immune system works so we can better understand how vaccines protect us.

B cells are a type of specialized white blood cell that defend us through the production of specific proteins called antibodies. When a B cell encounters a pathogen that it recognizes, it starts to produce antibodies. Like a missile that seeks out its target, antibodies are released into the blood or tissue to ‘seek and destroy’ the pathogen. They work through a variety of mechanisms that ultimately lead to the removal and destruction of the pathogen.

T cells are another type of specialized white blood cell. Although there are several kinds of T cells in our body that play a role in defense, the cytotoxic or ‘killer’ T cell is one of the most important.  When a ‘killer’ T cell finds a cell that has been infected by a pathogen it destroys the infected cell, ensuring that the spread of infection is stopped.

Now that we know what B and T cells are and how they fight to keep us healthy, what do they have to do with vaccines?

Although B cells and T cells are highly specialized and very good at fighting pathogens, the first time these cells encounter a pathogen it takes over a week for them to become completely effective and ready to fight the infection. Every time a pathogen enters our bodies, only a few of these specialized cells interact with the pathogen. This primary or first interaction is invaluable as it lets the B and T cells know that they need to build an army to attack the pathogen. The armies built-in response to each pathogen are composed of hundreds to thousands of clones of the same B and T cells that originally interacted with the pathogen. As a result, they are all designed to attack and eliminate the same pathogen. Although incredibly effective, the creation of a specialized ‘immune army’ in response to a pathogen that was just recognized usually takes at least a week to build and be ready to fight.

This is where vaccinations become so important.  Vaccines are composed of non-disease causing forms of pathogens that allow our immune armies to be created and established before we encounter the real disease-causing pathogen in everyday life. Vaccines train our ‘immune army’ to be ready to fight if and when they encounter the real pathogen at a later time.

After vaccination, our immune system is ‘good to go’ when we 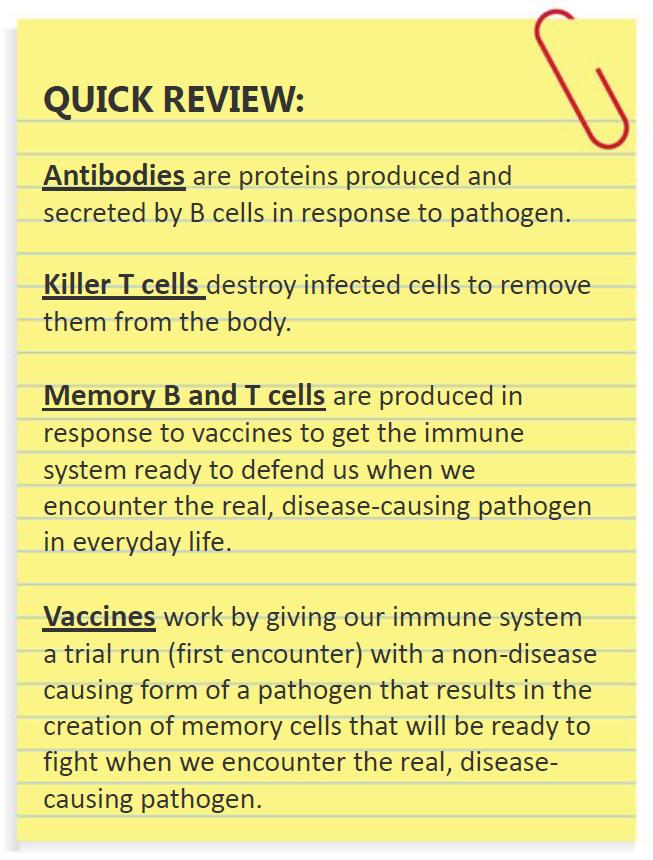 encounter the real deal or disease-causing pathogen in everyday life.  This first encounter or ‘simulation’ infection results in the formation of ‘memory’ B and T cells. The creation of memory cells is what makes vaccines so effective! Memory cells are long-lived and their job is to continually patrol the body looking for the pathogen that they are built to fight. If they find it, they respond extremely quickly and with heightened intensity – so quickly and so intensely that we do not become sick or develop disease. The week that was needed to build the ‘immune army’ is bypassed thanks to vaccination and the immune system can respond immediately because it’s ready!

Now that you understand the basics of the immune system and how vaccines protect us, what would YOU like to learn about the science behind vaccines? Tweet us your questions and ideas @ImmunizeCOKids, and stay tuned for the next Immunology 101 Series post to read about the different types of vaccines.